It was a tough winter in 2009 for Dolores the bear and her friends who endured the winter cold with no fur due to a mysterious disease that has vets shocked in Leipzig zoo. 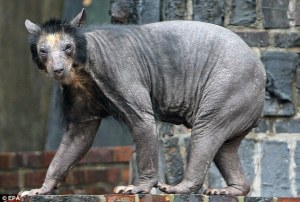 The first sign of shedding began in 2007 at the Leipzig and two years later all the female bears were almost completely hairless. Vets all over think that Dolores and her friends lost their hair due to the change in temperature that occurred when they transferred from South Africa to the Leipzig in Germany. Some vets also think it could be a genetic defect that left the bears bald and in the nude.

Many of the bears have also developed rashes or other skin problems due to the hair loss. The problem was so bad that zoo keepers would have to apply ointment on the bear’s skin.

The hairless bears became a viral sensation overnight. People all over the world where talking about the bears. Many people came in herds to the zoo to see the hairless bears. They were described as terrifying, however many who saw the bears were saddened and felt bad for the poor bears.

These bare bears would normally have a thick fur coat of long dark hair but instead Dolores and her bear friends are left with several inflations, rashes and random patches of hair on their bodies. As they are thrown into the harsh conditions of the winter.